Spicy crumbled tempeh, loads of veggies and warm cashew queso scattered over a bed of organic corn tortilla chips… These Vegan Nachos with Spicy Crumbled Tempeh are the ultimate party food made good for you! 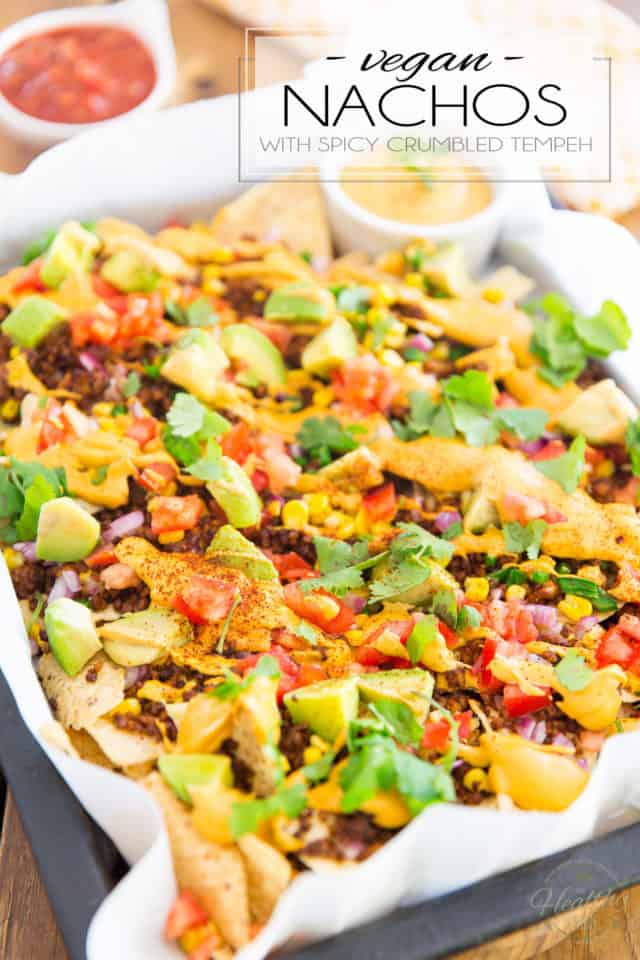 Nachos are definitely one of my favorite party foods! Since going vegan, they are one of the things that I’ve missed the most, especially when visiting my favorite local micro-brewery, where they [unfortunately] make a wicked plate of nachos, which is now totally off limits for me. Mind you, it’s probably better this way I guess, since their version is far from being healthy…

After making a batch of Cashew Queso the other day, I decided that this was the perfect occasion for me to try my hand at creating a much healthier version of this favorite party food of mine. I loaded it with all kinds of beautiful vegetables, added some yummy spicy crumbled tempeh and drizzled the whole thing with warm cashew queso. Wow! Talk about an explosion of flavors!

While I must admit that something has to be said for having loads of melted cheese to sort of hold everything together, which unfortunately the queso doesn’t do, this version has so much flavor to it that it totally compensates. Plus, I’m using much less tortilla chips, too… which also contributes to the whole yuminess factor. Less chips, more toppings. I’m all for that!

Only thing is: I strongly recommend grabbing a fork and a napkin or two before you dig in. You’re definitely going to need them!